Cappadocia is an area full of history and fascinating landscapes that will amaze you. These tours are specially prepared to introduce Cappadocia with all its details. There are three main tours; Red Tour, Green Tour, and Blue Tour. These are designed to teach the nature and the incredible history of the region. The fact that they are called like that, is so that they are not confused. It’s easier to remember at the same time. Each tour has a different itinerary. On each tour, you see one or two valleys. In our tours, you will be accompanied by a professional guide who, in addition to showing you the wonderful views, will give you a lot of information about the history of the area. 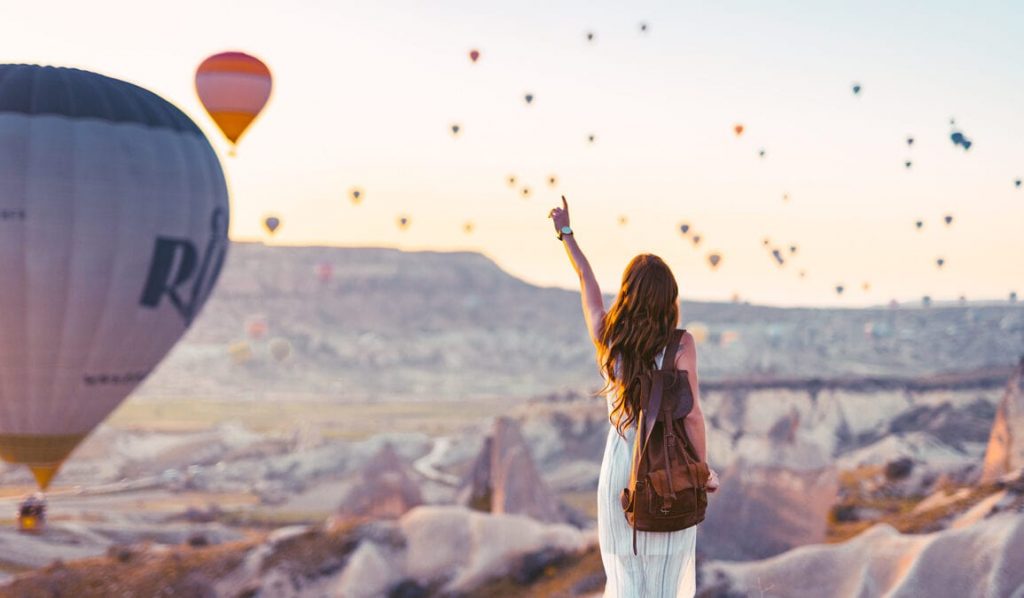 Itinerary of the Regional Tours in Cappadocia 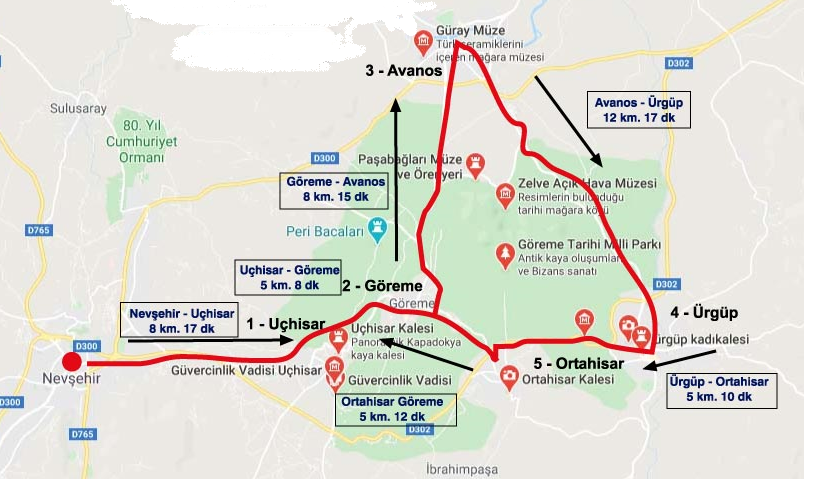 You can start your tours in Cappadocia with the ones in the areas near the center. All the tours that take place in Cappadocia are very important and interesting. But if we must take into account the most favorite of the travelers we have to recognize that it is the Red Tour. It is a basic tour that contains the main thing to have a general idea about Cappadocia. It is the favorite tour of those who come on honeymoon since it contains the Valley of Lovers. During the tour, you will have the opportunity to visit a pottery workshop where you can see and experience how the objects are made. In the end, you will be able to take your masterpiece as a souvenir.

The castle or fortress is located at the highest point of the town of Uçhisar. You will have the opportunity to explore and take photos of this wonderful castle that dominates the fantastic landscape of the region. The panoramic points and the cafes located around are the best places to admire the landscape and take photos. It is one of the highest points in the region. From Uçhisar Castle you can perfectly see places like Ortahisar Castle, Göreme City, Göreme Open Air Museum, Kızılçukur, Güllüdere, Çavuşin, Boztepe, Aktepe, and Avanos.

This valley has various names like Love Valley, Lovers Valley or Valley of Bağlıdere, it is one of the places where you can see the natural structures of the Cappadocia region. It is a fairy tale place where you will fall in love over and over again with your partner. Far from the chaos of the city, it is the best place to tune in with yourself and bring inner peace. On the sign on the road it says ‘Bağlıdere’, we tell you that so that you are not looking for the place of the Valley of Lovers. It is a valley that you should not go without seeing it since it houses some hidden natural beauties.

From an early age, the Cappadocia region was a center for crafts, especially pottery. The pottery we see in this region today still uses the ancient technique from thousands of years ago. In the pottery workshops that we visit, you will have the opportunity to try this extraordinary reddish-colored mass with your own hands and you will be able to take it as a souvenir. Workshops often have exhibition rooms where you can see and buy the works of the great masters and their apprentices. These ceramic objects will be good memories of Cappadocia.

The Valley of the Monks, better known as Paşabağ, is a very special place where you can see different forms of fairy chimneys, in better condition thanks to its situation in a deep valley. This place was used by the monks as a place of retreat.

The Dervent Valley, also known as Dream Valley, is located just halfway between Ürgüp and Avanos. The name of the valley comes from the different rock formations. Some resemble animals, others have human forms. Travelers often stop along the way to let their imagination run wild and of course, take photos with these interesting rock shapes. Dervent Valley has located 5 km from Ürgüp and 6.5 km from Avanos.

Another of the important regional tours is the Green Tour. The Green Tour includes a Cappadocia Underground City. On this tour, you will visit the underground city of Derinkuyu, which occupies most of the tour. In addition, two valleys are visited, the first is the Ihlara Valley; where you take a walk of about 4 km in a wonderful landscape. At the end of the walk, we visit an onyx workshop where you can see how precious and semi-precious stones are worked. Here information will be given about these precious and semi-precious stones that come out of Turkish mines and you will have the opportunity to make purchases.

Cappadocia is a rugged area that has fascinating places where you can take in the entire panorama. As it is the quite a concentrated region, you will be able to see almost all of Cappadocia as if it were under your feet, from a bird’s eye view. Göreme Viewpoint is one of the few places where you can see the balloons in the air at sunrise.

There are about 36 underground cities in the Cappadocia region. They are the ones that are known at the moment and the underground city of Derinkuyu is the largest one. This city, discovered in 1963, opened its doors to the public in 1967. The name of the city, which means ‘deep well’, comes from the 52 wells approximately 70 meters deep. Derinkuyu is supposed to have 12 or 13 floors but only 8 of them are open to visitors. Derinkuyu occupies an area of ​​2.5 km and reaches a depth of 50 meters at the moment. It is said that it would reach 85 meters if all the floors are cleaned. Don’t leave Cappadocia without seeing an underground city.

Cappadocia is the general name given to the area between the cities of Kayseri, Aksaray, Nevşehir, and Kırşehir. Nevşehir is located in the center of this area and is home to more fairy chimneys than other regions. The Ihlara valley, with an 18 km long canyon, is located in Aksaray. The Ihlara Valley differs from the other canyons as it is an inhabited canyon. The Melendiz River, which flows in the Ihlara Valley, created a flora and fauna not common in the Cappadocia region. On the banks of the river, you can see many churches actively used in their time. 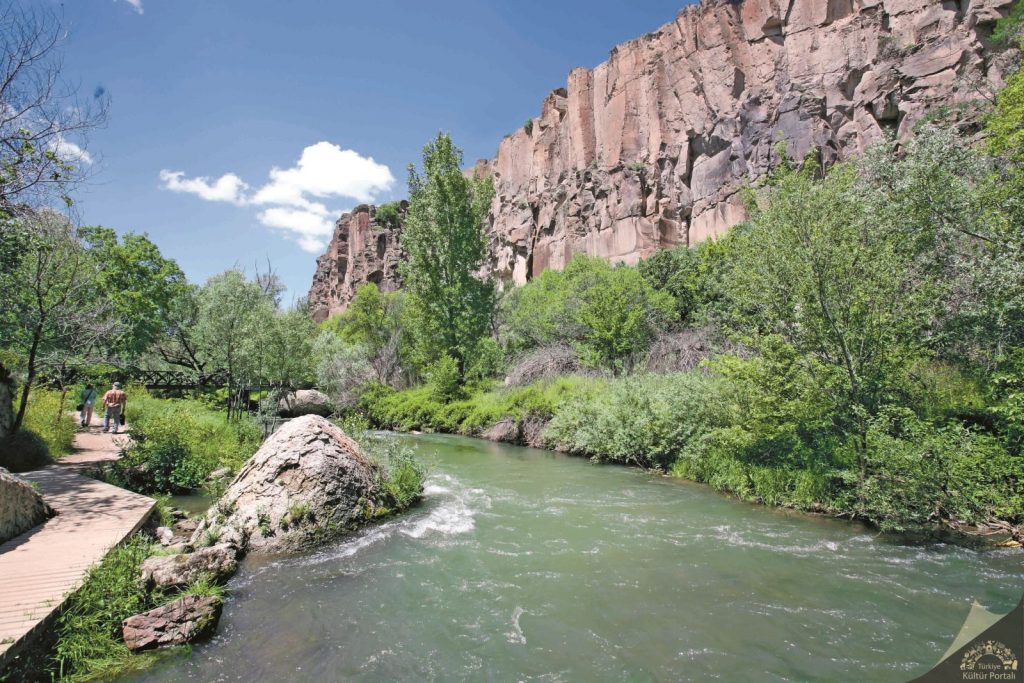 The Güvercinlik valley, the valley of the pigeon houses, with its vast walking terrain, lies between Uçhisar and Göreme. It is one of the ideal valleys to see the sunset. Pigeon breeding, which has been carried out in Cappadocia since the 9th century, is a very common task among the people. The dovecots carved into the rock wall are used to collect the fertilizers that are used as natural fertilizers in the region’s vineyards. It is known that the fertilizer was also mixed with the paint used in the frescoes to better preserve the wall paintings of the churches in the Cappadocia region. This valley is one of the basic places you should see in Cappadocia.

In the onyx workshops, you will have the opportunity to see and have detailed information about precious stones such as ruby, emerald, opal, sapphire, amethyst, which are often used more in the manufacture of precious jewelry and semi-precious stones such as onyx, amethyst, aquamarine, agate, tiger’s eye, tourmaline, moonstone, amber, which are worked more with silver as metal. In addition, you will have the opportunity to get up close to the Zultanite stone that only exists in Turkey, and comes from the mines in Milas in Muğla. The Zultanite Stone is a very special stone that changes color depending on the light it receives, it is the only stone in the world that is worked directly, without going through any special chemical treatment.

Blue Tour is another tour that includes an Underground City. The eight floors underground city of Kaymaklı also houses stables, cellars, dining halls, ventilation channels, and wells like other cities. This tour has a walk through the Red Valley of about 2 km in which you can take advantage of and enjoy the nature of the area.

Keşlik Monastery is one of the Christian teaching centers among many in the Cappadocia region. The fact that it is a monastery dedicated to Archangel Michael and Saint Stefanos, gives a special place to this place. Located about 17 km from Ürgüp, this well-preserved monastery was built by priests in the late 3rd century during the spread of Christianity in the Roman Empire. This monastery, which receives many visitors every year, consists of two churches, a sacred spring, a refectory and a winery. 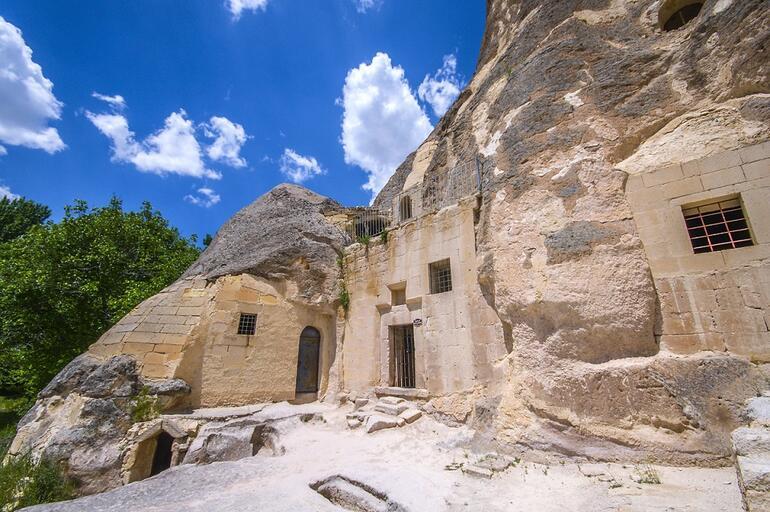 The people usually give different names to the places and for this reason, the Kızılçukur Valley is also known as the Red Valley. Red Valley is one of the high points in the region that allows you to see Ortahisar Castle to the south and Uçhisar Castle to the west at the same time. The Red Valley, a favorite place for travelers to enjoy the sunset, gets its name from the change of color that takes place in the rocks at that time. If you want to see the sunset, it is recommended to make a reservation in advance and dress warmly in thick clothing because in Cappadocia, in outdoor places and especially at sunset it is quite cool.

Located about 20 km from Nevşehir, the underground city of Kaymaklı has a history that dates back to 3000 BC, to the time of the Hittites. With the information given by your professional guide, you will have the opportunity to explore closely how people lived in these places 5000 years ago. You will have the chance to examine in situ the environment and the physical structure of the place. Our guides will also inform you about the legends and mysterious stories of the place. 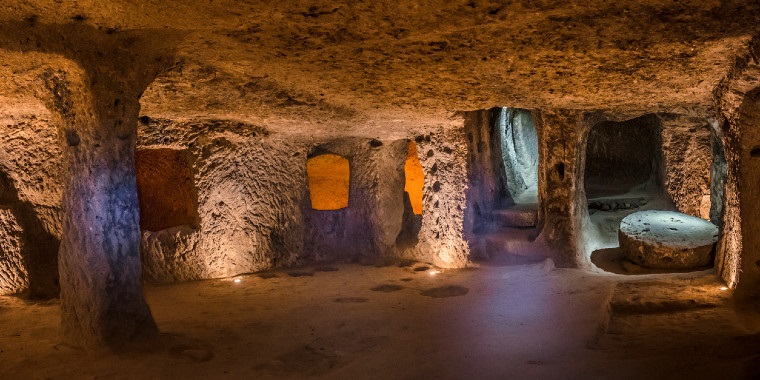 How many hours are the Cappadocia Regional Tours?

As a general rule, our regional tours are regular daily tours, and our bus leaves at 9:00. You have lunch included in the tour. Tours generally end between 4:00 PM and 5:00 PM. At the end of the tour, we take you back to your hotel.

The services included in the regional tours in Cappadocia

To know better and the best of Cappadocia it is convenient to join the tours. Just seeing the view is never enough in this region. To know in-depth, you must find out about how the Cappadocia Region was formed, its history, the civilizations that dominated these lands, what the Underground Cities were used for and how the Fairy Chimneys were formed. Please contact us at Htr Tours to get to know these fantastic places and learn more about the region.